Lobster Mini Season or also known as Lobster Sport Season is a two day annual event that occurs on the last consecutive Wednesday and Thursday in July.  It was established in 1987 and was designed to give free divers and scuba divers an opportunity to harvest  lobster prior to the start of the commercial lobster season.  Regular and Commercial lobster season runs from August 6th through the end of March.  There is a 12 lobster limit per day statewide except Monroe County where it is limited to six.  The lobster carapace must be at least 3″ , not be egg-bearing and can not be speared or gigged. To measure the carapace, place the front of the measuring gauge on the front of the carapace in between the eyes and slide the gauge back until it stops. This marks the front point of the measurement.  Any lobsters measuring less than 3′ must be released immediately . According to regulations, the lobsters must be measured immediately after being caught and before taking them out of the water. Gender of a Spiny Lobster can be determined by examining the structure of the pleopods (also called swimmerets or swimming legs) on the under side of the tail. Pleopods in males consist of one lobe and resemble feathers or paddles; in females, the pleopods have two lobes: one which is the same as described in the males, and a second lobe under the first lobe which resembles pincers. Both males and non-egg bearing females may be harvested. Lobster divers must possess a saltwater fishing license with a lobster harvesting stamp. The Lobster Mini-Season, as well as the regular lobster season, is managed by the State of Florida’s Fish and Wildlife Conservation Commission (FWC) and harvesters are closely monitored.
Sea Experience has three trips going out each day on Wednesday and Thursday, July 25th and 26th, at 5am, 1pm and 6pm with check-in one hour prior to departure.  Be sure to bring your lobster gear and license! 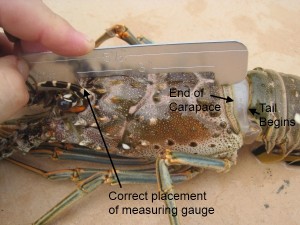